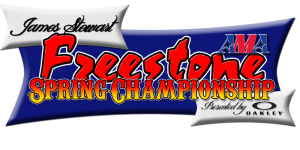 James will be on hand for the official track walk on Monday, February 27th, and riders will have several chances to speak and listen to one of the fastest motocross riders to ever throw a leg over a motorcycle.  James will have a couple other special surprises, but one of the greatest will be for each champion of all 49 classes; James is inviting each champion to come and train with him at his compound in Florida in the fall.

“Each year for the last 15 years, amateur racers from around the country and the world have come to Texas to kick off the amateur motocross racing season in the United States,” said Tom Shields, Marketing Director of Freestone. “The AMA Spring Championship is in its second year and with the addition to having James giving back in this manner makes him an even greater ambassador to our sport.”

“Having my name attached to an event such as the AMA Spring Championship is amazing” said Stewart. “I always wanted to be a bigger part of the motocross industry and I think this is taking amateur racing to a new level.  I loved competing in amateur races, so my heart has always been with the younger generation coming up because they are the future of our sport.” James added “To be there and to be a part of that younger generation and to know one day these future champions are going to say that they had to go through the James Stewart AMA Spring Championship is a true honor. I look for this just to be the start of many great things with my relationship to this event and I know it will give me goose bumps to look up and see ‘James Stewart AMA Spring Championship’ as I drive into the track.”

For the past five years, the mission of James Stewart Entertainment (JSE) has been to present both the motocross community and the general public with quality driven interactions designed to entertain, educate and motivate our audience to achieve more.  As a realization of a life long goal, James Stewart Jr. has mobilized JSE to reach out further into our fan base by participating in various events and appearances across the globe and throughout the Internet.   For more information on James Stewart or JSE please log on to www.js7.com or follow on Twitter @JS7.

Freestone County Raceway was established in 2000 and is located on the 1150 acre Miller Ranch.  Freestone is home to Round 2 of the Lucas Oil AMA Pro Motocross Championship.  Freestone also promotes the largest amateur series in Texas (Texas Winter Series), the James Stewart AMA Spring Championship and boasted the brightest lighting of any motocross track in the country.  For more information, visit www.freestonemx.com.