March 5, 2013 (Wortham, Texas) – Freestone County Raceway, L.L.C. is proud to announce the support of James Stewart and James Stewart Entertainment (JSE) for the AMA Freestone Spring Championship.  A two-year agreement has been reached that will continue with all of the incentives that make the trip to the center of the United States something special.  As such, the event is now part of the newly formed American Motocross Championships.

James Stewart said “It means a lot to me that we’re able to get this thing going again.  We added new sponsors, the entries are coming in and the event is growing the right way.  I’m really glad to be working with all the guys again and making this thing work for the kids.  I remember my amateur days and my pro racing in Texas and Freestone is a great place for these kids to start their years off.  It’s going to be fun; we’re still growing the event so we’ll keep thinking of new ways to make it grow.”

As one of the bonuses in winning a class championship, those riders will be on the invitation list to join James at his compound in Florida for the Champions Ride Day.  “Big James, Sonja & Malcolm Stewart along with James rode and assisted in pointers on and off the track” said Tom Shields, Event Director for the JS7 Spring Championship.  “Sonja (James’ mother) stood on top of a jump with a flag in her hand all day during the Champions Ride Day.  It’s nice to see families still doing this together after so many years in this sport and the Stewart’s are no exception.”

The James Stewart AMA Spring Championship presented by Oakley, Parts Unlimited and THOR all begins on Monday, March 18th with the official track walk and riders meeting.  Then Tuesday, March 19th riders bid to lay down their fastest lap for their 1st moto gate picks.  All the racing begins on Wednesday, March 20th and finishes on Saturday, March 23rd with the awards ceremonies.  Every call can be heard LIVE via the webcast or LIVE streaming from the FreestoneMX Free iPhone app. 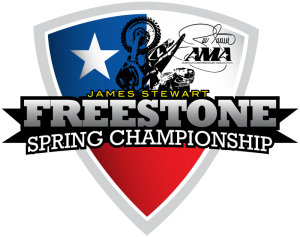 About James Stewart Entertainment LLC:
For the past five years, the mission of James Stewart Entertainment (JSE) has been to present both the motocross community and the general public with quality driven interactions designed to entertain, educate and motivate our audience to achieve more. As a realization of a life long goal, James Stewart Jr. has mobilized JSE to reach out further into our fan base by participating in various events and appearances across the globe and throughout the Internet. For more information on James Stewart or JSE please log on to www.js7.com or follow on Twitter @JS7.

About American Motocross Championships:
The American Motocross Championships consists of an elite group of amateur motocross events. The goal is to satisfy the needs of the motocross racing community and industry stakeholders by working with one another and the respective sanctioning bodies to develop the best practices for amateur racing, while maintaining the individuality and heritage of each unique event. Its purpose is to create a common voice through the sharing of information in order to develop event safety protocol, standardized class structure, scoring and rules, while providing calendar and geographic balance throughout the year For more information, go to www.AmericanMotocross.com.