This will be the very first event at River Valley Motocross Park under the lights this Saturday night.  Gates at River Valley will open at 2pm on Saturday with registration opening at 3:30pm and practice beginning at 5pm.

Another first will be having a Double-Header weekend down in the Houston metro area.  As much as we needed rain in Texas, it forced the calendar this weekend to be packed with race action.  The South Texas Night Series will first run its make-up race for Round 4 on Friday, June 6th at Rio Bravo MX Park.  Then on Saturday night, the series will move to Conroe at Three Palms Action Sports Park for the final round of the series on June 7th.

Both times scheduled of the South Texas Night Series on Friday and Saturday will move back one hour to help accommodate those coming from work on Friday but still keeping in mind to end early as the series has done all year.  Gates will open at 3pm, registration at the track will open at 4:30pm and practice will begin at 6pm.

Save your self $5 per entry by registering online between now and 11pm tomorrow night.  Check the points and if your name is not in the TOP 20, now is the time to get seeded for the FMF Invitational Shootout at Freestone County Raceway on June 21st. 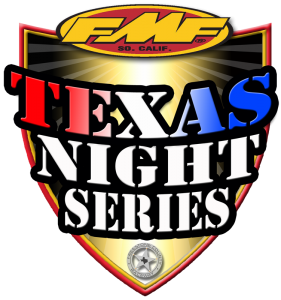